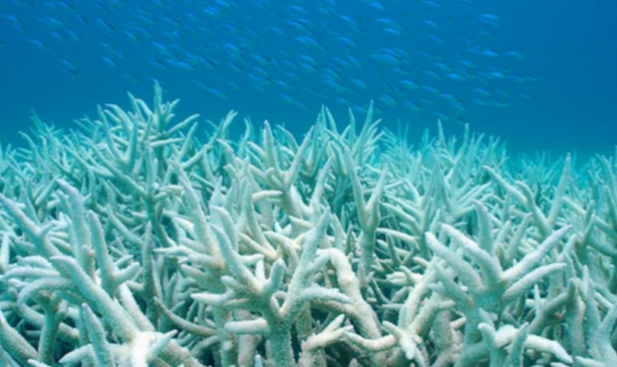 Corals are animals. They can often get mistaken to be rocks due to their hard surface. They can also be mistaken for being plants due to their structure “taking roots” to the seafloor. In fact, the mound that is often called a coral is made up of thousands of tiny creatures called polyps. And just like us, these corals can get sick. Their sickness can be caused by several reasons such as bacterial infections, viruses, pests, temperature instabilities, water parameter fluctuations…
Most common diseases include but not limited to: white plague or white band disease, black band disease, coral bleaching, white pox disease, dark spots disease, aspergillosis, brown band disease, yellow band disease
1) White plague or white band disease

White plague is a bacterial infection. The symptoms include loss of tissue, leaving the white skeleton exposed. There are two types of this disease; type I and type II. Type I occurs on branching corals moving from the base of the branches towards the tips, while the second type moves in the opposite direction. 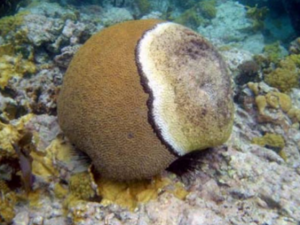 This disease is caused by a bacteria called cyanobacterium. This bacteria can look brown, Purple, red. If left untreated, it will become thicker and carpet your corals, eventually killing them. 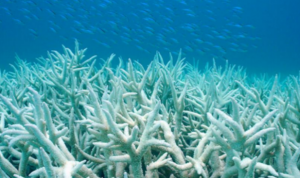 Coral bleaching is a stress reaction of the coral animals. This stress reaction is
driven by extreme temperatures and are intensified by sunlight stress. Other causes
include increased salinity, low oxygen, disease and predation. The stressed corals
will first appear to be paling, and then bleach completely to become “snow white”.
The stressed and bleached corals are living in a weak state as they are unable to
reproduce properly and will be more weakened against diseases and will have
higher mortality rate. If stressful conditions are eliminated soon enough, the corals
can actually survive. 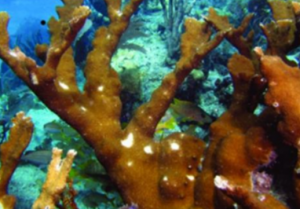 This disease is believed to be caused by pathogen Serratia marcescens. It is
characterized by irregular white patches or blotches on the coral that result from
the loss of coral tissue 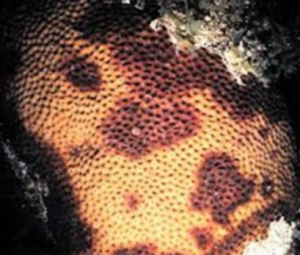 Dark spots disease cause is yet to be confirmed. Some say it can be caused by
stress, others claim it is caused by an unknown pathogen. It is characterized by
dark (brown or purple) pigmented areas of tissue on scleractinian corals. The
pigmented areas may or may not overly recessed areas of coral skeleton. 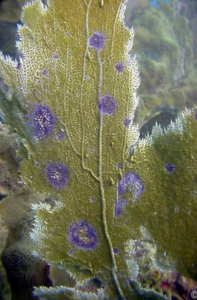 It is caused by the pathogen caused Aspergillus sydowii. It affects Gorgonian soft
corals commonly known as sea fans. It is characterized by the spread of hyphae in
coral tissues causing lesions. These lesions cause losses in tissues and skeleton.

Source: nsf.org
probably caused by protozoa (possibly Helicostoma nonatum) and cyanobacteria . This disease is characterized by the formation of a brown zone which is preceded by healthy tissue and followed by exposed white skeleton as it progresses across the coral 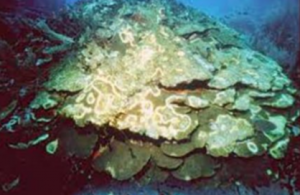 It is also known as rapid wasting is mostly caused by parrotfish bites followed by the intercellular growth of the pathogenic fungus Rhodotorula rubra. The affected corals by this disease exhibit rapid breakdown of both coral tissue and coral skeleton. 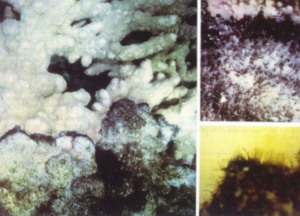 Source: biophysics.sbg.ac.at
caused by the protozoan Halofolliculina corallasia. This disease is characterized by the formation of black or gray band that slowly advances over coals leaving a spotted region of dead coral. The coral polyps are killed during the process. 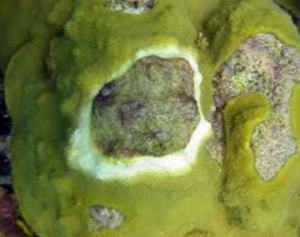 Source: rice.edu
It is most likely caused by vibrio bacteria. It is characterized by yellow colored blotches on the coral that continue to spread in an o-ring shape. The bacteria doesn’t attack the coral itself, but rather its major energy source also known as the coral’s symbiotic photosynthetic algae, called zooxanthellae, leaving the corals to starve.

The best way to deal with these diseases is through prevention. When you want to introduce a new coral to your aquarium, it’s better to quarantine it first in a separate environment in order to ensure that it’s disease free. Also, you must periodically test your tank temperature, water parameters, and the suitability of your tank lights. In addition, you must observe the shape and colour of your corals as they are usually the first pointers of a certain disease, and perform coral dips to remove pests.

As always, if you have any questions or feedback, please get in touch with us at [email protected]  . We’d love to hear from you!

How to set up the ReefBot Pro...

The ReefBot Pro is our newest water testing parameter device capable of measuring...

Why the ReefBot Pro is

Have you ever thought of finding a special spot where the river meets the ocean? Watching...

Nature provides natural filter for water, be it in the ocean, ponds, lakes, rivers … As...

After the massive success ReefBot has accomplished in testing saltwater water parameters,...

Starting your business vs...

How expensive it is to get...

That is a broad question to answer. A suitable answer would be “it...